Most of us hate Mondays. By this I mean too many of us love the good life but hate working and are ready to grab any excuse not to. But James Robertson is an exception. He loves working and his uncanny work ethic and determination is guaranteed to leave any rational mind stunned with admiration. Robertson is a living proof that hard work always pay and that he who has a why to live for can bear almost any how.

For the past decade or so James Robertson, 56, of Detroit, has being walking many miles daily to his factory job. His roundtrip commute requires a bus ride each direction as well as nearly 21-miles of walking consuming 22 hours of his day.

His typical day starts at 6am. It takes James 7-8 hours to get to his job at Schain Mold & Engineering in Rochester Hills in time for his 2pm -10pm shift. As his fellow employees jump into their cars after a tiring shift Robertson sets off, on foot — in the dark — for the 23-mile trip to his home off Woodward near Holbrook. Roberson will get home at 4am, get a shut eye for about two hours before getting up again by 6am. He will do this five days a week. Monday through Friday.

It’s the life Robertson has led ever since his car broke down over ten years ago. He didn’t replace it because his paycheque is not enough for him to buy, maintain and insure a car in Detroit. None of his coworkers lives anywhere near him, so catching a ride almost never happens.

“I have to go through Highland Park, and you never know what you’re going to run into,” Robertson says. “It’s pretty dangerous, really, from 8 Mile on down. They’re not the type of people you want to run into”. Actually, he did get mugged several years ago — “some punks tuned him up pretty good,” says Wilson, the plant manager. But Robertson chooses not to make that scenario a big issue. 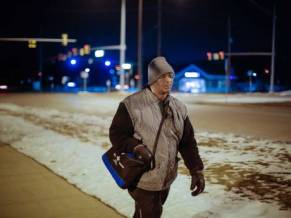 Robertson’s desire to work drives him to do whatever it takes to get to his job on time – be it sleeplessness, unreliable bus rides, or daunting walks – at all times, in all kinds of weather. Although every trip is an ordeal of mental and physical toughness James prides himself with a perfect attendance record at work. Every day is a tribute to how much he cares about his job, his boss and his coworkers.

“I set our attendance standard by this man,” says Todd Wilson, plant manager at Schain Mold & Engineering. “I say, if this man can get here, walking all those miles through snow and rain, well I’ll tell you, I have people in Pontiac 10 minutes away and they say they can’t get here — bull!”

As he speaks of his loyal employee, Wilson says Robertson’s attitude is exemplary. He’s industrious, charming and his work is flawless. Before starting his shift, Robertson stops by the office every day to talk sports…

Clearly, James has found his purpose for living, and he loves it. “I can’t imagine not working… you have to fire me to get rid of me” he says. “I’ll keep working until when they no longer need me.”

But, what else gets him past dangerous streets, and through the cold and gloom of night and winter winds? “One word — faith,” Robertson says. “I’m not saying I’m a member of some church. But just before I get home, every night, I say, ‘Lord, keep me safe.’ “

Robertson is proud of all the miles he covers each day. But it’s taking a toll, and he’s not getting any younger. After his story became public last Sunday in the Detroit Free Press, people all over the world were greatly moved and contributed in droves to a Fund-raiser that was set up to help James get a nice vehicle along with a few months of insurance payments.

Within days the Fund-raiser for James reached $300,000 – enough to buy him a Lamborghini. But he wanted a Ford Taurus, telling the Free Press: “It’s simple on the outside and strong on the inside – like me.”

James didn’t even need to buy the car because several Detroit-area dealers offered Robertson the brand new vehicle to use free of charge. The money raised will now be handed to Mr. Robertson to help him enjoy the rest of his work life a little more.

On Friday, 6th of February 2015, upon getting the car , the key, and a dealership employee had helped him get re-acclimated to driving Robertson left — because despite all the attention, he still had to get to his 2 p.m. factory shift on time!

Yet, another solid proof that James lives to work as opposed to most of us who work just to earn a living.