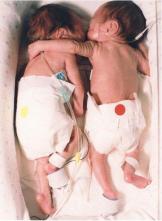 Kyrie and Brielle Jackson were born on October 17, 1995, a full 12 weeks ahead of their due date. The standard practice, that time, at The Medical Center of Central Massachusetts in Worcester, where the twins came into the world, was to place them in separate incubators in order to reduce the risk of infection.

Both babies were placed in separate incubators, a standard practice to reduce the risk of cross-infection. Kyrie, who weighed 2lbs 3 oz, was making good progress and gaining weight, but her tiny sister had breathing and heart-rate problems, there was little weight gain and her oxygen level was low.

On November 12, tiny Brielle went into critical condition. Her stick-thin arms and legs turned bluish-gray as she gasped for air. Her heart rate soared. The Jackson parents watched, terrified that their little daughter might die.

er exhausting all the conventional remedies, decided to try a procedure that was common in parts of Europe but virtually unknown in the United States. With parental permission, she placed the twins in the same bed.

No sooner had she closed the incubator door, Brielle snuggled up to Kyrie and began to calm down. Within minutes, her blood-oxygen readings improved. As she dozed, Kyrie wrapped her left arm around her smaller sister. Brielle’s heart rate stabilized and her temperature rose to normal.

Today, according to CNN, they’re all grown up and a sister bond is still strong. (Story by http://www.lifenews.com)

One thought on “LOVE: THE BEST MEDICATION”