Many people think that if they could just win the lottery, their whole life would change for the best. They think that once they win all that cash, then all their problems will disappear.

A new study by American psychologists has found that excessive wealth, particularly for people unaccustomed to it, such as lottery winners, can actually cause unhappiness. It is not surprising, therefore, that studies also show nearly one-third of lottery winners end up in bankruptcy. Here below are some of those people, through painful life experience, found out that you need more than money to be happy.

A woman who won a £2 million Lottery jackpot as a teenager has revealed how her life spiraled into drug addiction, depression and attempted suicides. Callie Rogers, now 22, said she had hoped the money would help her put the troubles of a broken home behind her, but instead she said the money only brought her misery. After winning the Jackpot at 16 Miss Rogers blew £250,000 on cocaine, tried to commit suicide three times, spent £11,500 on breast enhancements and lost custody of her two children. Miss Rogers, now down to her last £100,000, says she has never been happier. The former shop assistant, fostered as a teenager, said: “I am happier now I have blown my Lotto win. In 2005, after a suicide attempt, she said: “Until you win such a large amount of money at such a young age, you don’t realise the pressures that come with it.” She now works as a maid to sustain herself and her family. She is paying off debt induced by her spending.

Hospital porter John McGuiness won £10million in 1997 and he must have thought that his luck was in. He married his fiancée, Sandra, in a lavish £200k ceremony, bought a 500k converted schoolhouse and invested £4million in his local football club; Livingston FC. It was his beloved club that would be his downfall. After joining the club’s board he managed to get himself wrapped up in their debts and now he is £2million in debt. He’s had his house seized, his Porsche taken off him but at least he did get chance to donate £500k to charity.

Antiques dealer turned multimillionaire, Michael Antonucci scooped £2.8million back in 1998. He did the usual ‘aspirational things’ with the money; wasting it on the playboy life, marrying a topless model a third of his age, buying cars, yachts, holidays and investing unwisely. No cynics would be surprised that the marriage was over in three months and the money was spent. At least she’d had a good time and a bigger pair of surgically enhanced breasts courtesy of Antonucci. Most recently he fell foul of an old unpaid debt and got himself into a bar fight that resulted in a court appearance.

Everyone knows the odds of winning the lottery once are astronomical. But Evelyn Adams beat those odds — twice. The New Jersey resident hit the jackpot in 1985 and 1986 to the sum of $5.4 million. But Adams was a heavy gambler. And with Atlantic City being located in New Jersey, it wasn’t long before Adams had lost all her money. Twenty years later, Adams is broke and living in a trailer.

Sometimes, even good intentions can get wildly out of hand — as was the case for Janite Lee, the 52-year-old woman, who landed an $18 million payout from the Missouri Lottery back in 1993. The South Korean immigrant immediately began to contribute chunks of her wealth to various educational programs, community services and political organizations. Besides the usual million-dollar house and cars, Lee reportedly donated more than $1 million to Washington University, where her namesake reading room commemorates the occasion. She reportedly donated $277,000 to Democratic political candidates, earning herself meals with Bill Clinton, Al Gore, and even the President of South Korea. She didn’t stop there. $30,000 went to the family of a South Korean church pastor who passed away. The St. Louis Korean American Association received a house from her. Another Korean adoption-related association also benefited. Lee’s philanthropy was expensive. But combined with her gambling habit—she lost $347,000 in a single year—bank loans, and credit card debt, it harkened disaster. She filed Chapter 7 bankruptcy in 2001.

On December 25, 2002, West Virginia building contractor Andrew Jackson “Jack” Whittaker Jr. won $315 million in the Powerball multi-state lottery, at that time the largest jackpot in history won by a single person. At the time, he was the president of a successful contracting firm called Diversified Enterprises Construction. 55-year-old Whittaker was living a successfully comfortable American life complete with a net worth of over one million dollars, a well rounded family, great job and healthy grandkids. After winning the prize, he famously pledged 10% of his winnings to various Christian charities and created the Jack Whittaker Foundation with another $14 million.

Whittaker did some good, but his bad deeds make his story. He was arrested twice, once for drunk driving and once for threatening a bar manager. A woman sued him after he groped her at a dog racetrack. Thieves took $545,000 in cash from Whittaker’s car while he was visiting a strip club. About a year later, thieves again stole $200,000 from his car. Caesars Atlantic City sued him for bouncing $1.5 million in checks. His wife divorced him. Then, there were the dead bodies. In 2003, Whittaker’s granddaughter’s boyfriend was found dead of an overdose inside Whittaker’s home. His 17-year-old granddaughter, whom he had been giving a $2,100 weekly allowance, fatally overdosed months later, at a different location. His daughter—mother of the dead granddaughter—died this year of as-yet-undetermined causes. When reached for comment, Whittaker, now with no family and no fortune, said “I wish I’d torn that ticket up.” 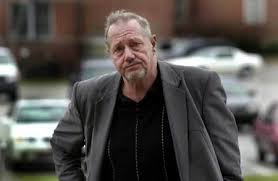 He became the self-proclaimed king of the chavs after turning up to collect his £9.7million lottery win wearing an electronic offender’s tag. But eight years on, having blown all that money, Michael Carroll is practising for a return to his old job as a binman.

The 26-year-old, who squandered his multi-million fortune on drugs, gambling and thousands of prostitutes, has since February claimed £42 a week in jobseeker’s allowance. But he is keen to get off the dole and back to earning £200 a week collecting rubbish near his home in Downham Market, Norfolk.

Carroll’s jackpot win in 2002 disappeared with astonishing speed as the tattooed self-styled ‘King of the Chavs’ lavished several million pounds on family and friends and hundreds of thousands on drugs. By the end of 2003, he was smoking £2,000 of crack cocaine every day and hosting drug and drink fuelled parties at his £325,000 home, the notorious Grange in Downham, Norfolk.

Carroll also lost £1million on the dogs and horses and even injected £1million into his favourite football team, Rangers. He was down to his last £500,000 cash in 2008 and last year sold his £400,000 fleet of luxury cars and spent the proceeds.But in February, as it emerged that he had been declared bankrupt, he told the Mail that he had no regrets about his lost fortune.He said: ‘The party has ended and it’s back to reality. I haven’t got two pennies to rub together and that’s the way I like it. I find it easier to live off £42 dole than a million.

Earlier this year one of Britain’s youngest lottery millionaires was found dead in his home where he lived as a recluse. Stuart Donnelly, who was 17 when he won £2 million in 1997, had become a virtual recluse as he struggled to cope with his new found wealth – and the sudden death of his father in 2000.

Mr Donnelly spent his winnings on many things including houses, one of which was for his mother, charitable donations to a hospital his brother was being treated at and an executive seat at Celtic Football Club. But he reportedly struggled to deal with the pressure of winning the lottery, particularly at such a young age.

One thought on “POOR LOTTERY WINNERS”